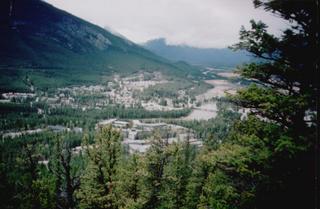 This is an overhead view of banff!!! (hey ma i can see my place from here!!)
Posted by Darren Elliott at 11:41 pm No comments:

its a beautiful day...dont let it get away!!

oh god is it a beautiful day today or what??

i did some cool errands today. went to maria's sewing shop then went over to the bear st mall to get my sunglasses re-adjusted and now im here at cyberweb cafe just chillin and updatin my blog!!

there is only like 3 clouds in the sky, thats it....blue blue blue sky all around!!

Posted by Darren Elliott at 5:28 pm No comments:

Ok tonites blog is going to be good. Ive gotten a day off so i have been thinking about things today. Still havent found out what kind of car that is on wolf st near otter.

Since dodge finally decided to re-release the charger, i think they should do the same thing with the coronet. I think it would be massively liked by all. I mean the new charger looks like a neon but revved up but it sounds and moves like any sport compact. This car should have muscle, cause its a charger and its quiet? what the...

Jame Ramsley once told me "someday you'll be charming some girl" meaning its kinda like the wedding singer when he plays guitar and sings for her. But things changed today when i came home from walking around town and heard a beautiful voice singing and playing guitar, i thought "who could that be and whos guita--and before i could say anything i saw it was one of the roomy's of the house singing and playing on my guitar. So i was charmed. Totally full circle!! And news is shes getting a guitar of her own and maybe some day in the next few months well sit down and jam or write songs or something. Shes a nice girl.

Youll notice on the right that there are 2 categorys for links, banff and Abroad. if you have any ideas please email them to me and i will add them. Make sure you let me know if they are banff based or Calgary & Abroad. Thanks.

I sent out a letter to my guitar instructor from ontario, darcy thompson. It came back the last time cause i missed putting in ON for ontario. Hope it makes it there this week. Its sunday, hell get it before next sunday. I wish i could track it...but its just a regular letter.

American Dad is such a bad show. It totally copies off family guy (fav show btw). It has no plot line (as far as i can see) and just totally a rip off from FG.Thats it...AD =0 FG =1. IMHO tho..

Im meeting some great ppl here in this house. Chris is a great guy. Very quiet when he speaks but still enjoyable. Phil is probablly heartbroken because " the girls" that he used to hang out with all the time just left him. They werent mad just their time was up. I think they moved to montreal or something.

Ive got to write a song sometime soon or my songwriting mind will just run dry then i cant write songs.

Blogging Tip of the Night:

If you are stuck, like totally shit out of luck on ideas. Think of something that has made you mad or frustrated and thinbk in your mind this phrase "and thats the thing" and go with that and im sure youre bloggers block will be cured!!

I dont know if this has been patented but think of when you awake from a dream about...um like something you dont want to dream about any more and you get sort of a mind headache, theres no pain but it feels weird and you can feel it all thru the day thats a mental hangover. If this sounds strange thing of how you feel on a real hangover. Point Proved!!

Hello Mr McGraw, you recently visited my new hometown of banff alberta and somehow went up on stage at a local bar and grill and performed. I had heard that you performed in Calgary Alberta during the stampede but could not believe that a big country star such as yourself would play in such a town as this. I had not heard of the performance untill the next week when i picked up the paper and noticed your picture on the front. I was stunned.

The reason im writing this is because ive been waiting to tell you that you inspired me and you still inspire me when i write songs. When i first heard the song "something like that" i was really touched because it was like my own life, but not 100 percent. I had heard the song just when i had begun to play guitar and write my own origional songs about life and other things.

The song had helped me put the first few words in the first song i had written, but i couldnt just copy all of your words, after all its supposed to be my work. So i took the main idea in the chorus and somehow had to change the words to fit my life so i wrote..

"a heart never.." and i had to figure out what to use instead of your words so i said its this girls voice that i cant forget. so i continued the line with "..forgets a voice" and once i got that done i just kept going and going and going and now every person ive played it to picks that song as the better of the 10-15 songs ive written because it has heart.

I know the odds of Tim McGraw actually reading this are slim. I had to write this because it was getting on my nerves,i had been thinking about this for quite some time.

Thanks Mr McGraw for somehow inspiring me. Though I know i may get most of it from that one song i heard but i had always thought it was my inner instinct but it was mr mcgraws song that did it for me

That would be a cool letter to send him, i think itd be cool if he read it here but those odds are un beatable.

Posted by Darren Elliott at 2:04 am No comments:

Harry Potter and the Sorcerer's Stone
by J.K. Rowling

Harry Potter and the Prisoner of Azkaban
by J.K. Rowling

Harry Potter and the Goblet of Fire
by J.K. Rowling

Harry Potter and the Half-Blood Prince
by J.K. Rowling

The Arctic Incident
by Eoin Colfer

Check out music from Darren Elliott